The term in vitro literally means grass, i.e. fertilization and embryo production in a glass container. This is the most popular method of assisted biological fertilization and brings hope to thousands of couples who without this procedure could never have an offspring.

The fertilization is implemented so that the egg cells are removed from the ovaries and are fertilized in a laboratory dish, yet the fertilized egg cells as embryos are returned directly into the uterus.

Biomedical insemination is commonly used in women with impassable egg cells, after several attempts with other methods such as IUI, poor sperm tests of the male partner, or for couples with idiopathic i.e. infertility of unknown origin.

This is rather a more complicated procedure than intrauterine insemination and may differ in some details from clinic to clinic but generally includes several phases:

At the beginning of the human reproductive procedure, a specialist prescribes a therapy in order to stop the production of pituitary hormones that are released into the blood during the menstrual cycle (agonists) so as to gain a better control over the production of the ovarian cells. Sometimes the doctors decide on an alternative solution with other types of medications, called antagonists which are used to stop the pituitary hormone, or to stop spontaneous ovulations. Then they suggest the use of other drugs that stimulate the ovaries in superovulation so as they would produce more than one mature egg cell. .

During the stimulation the doctor by using the vaginal ultrasound follows the follicle growth, the level of the estradiol in the blood, and the level of some other hormones which are necessary to monitor and forecast the success of the in vitro procedure. When the follicles receive a certain size, usually after 9 to 11 days of the stimulation a HCG or a standpoint injection is given and after 34-38 hours an aspiration of egg cells from ovaries is done.

This phase is performed under the control of a vaginal ultrasound with a long and thin needle entering each of the follicles through the vaginal wall, once entered in the follicles its content is emptied with vacuum aspiration. The procedure is performed on both ovaries and it is usually painful, because of what a short anesthesia with analgesia is given before the procedure starts. 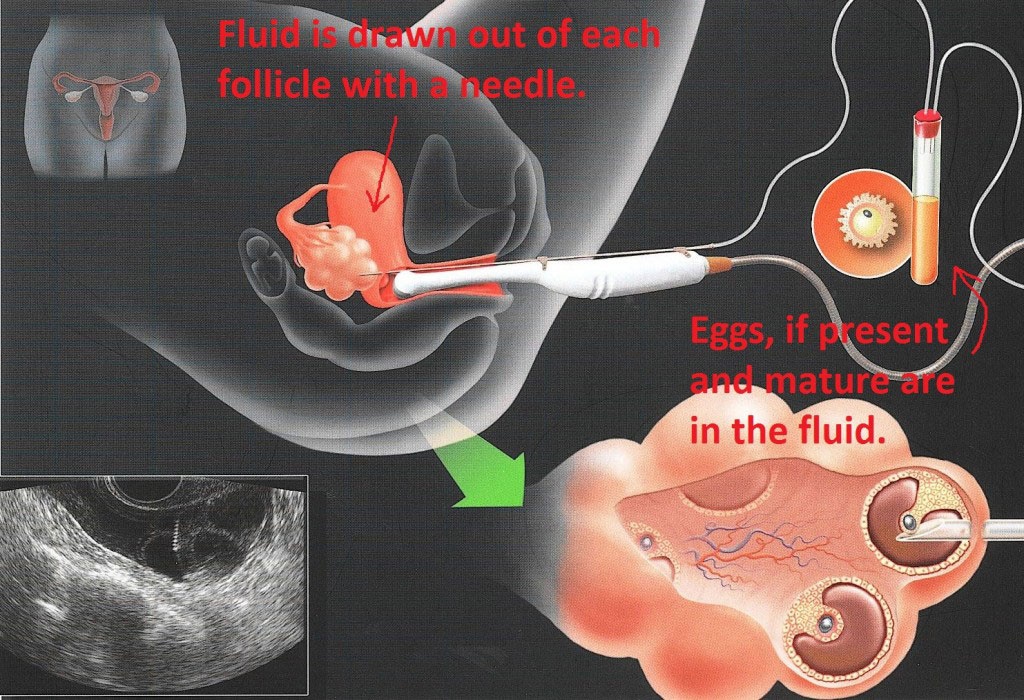 At the time of aspiration of egg cells the partner leaves fresh material, the gained sperm stays for a short time and then it is rinsed and spun so as the healthiest and the most active sperm remain for the fertilization. If a frozen sperm is used in the procedure, the sample is thawed and prepared for the procedure as a fresh sample. This process mimics the natural process because fertilization is performed only with the most active and best sperm, as they are the only ones who make it to the egg in the woman’s body.

In our clinic we only use the method ICSI fertility which is described on our website. The next day, or sometime after 20 hours we check how many eggs are fertilized by following the appearance of pronuclei as they enter the zygote phase.

After the aspiration of egg cells, the patient is given vaginal progesterone preparations, creams or/and injections so as to prepare the endometrium for embryo acceptance. Also your doctor may give you another therapy, such as, anticoagulant, anti-inflammatory, antiplatelet, which would increase the possibility of implanting the embryo and thus the percentage of success of the procedure itself.

2 to 5 days after the fertilization the embryos are returned to the womb of a previously well prepared endometrium. In our country we return maximum 2 or in special circumstances and with a consent of the couple 3 embryos. It is important to distinguish when and how may embryos should be returned as a number of embryo increases the chance of success, but at the same time increases the risk of more fertile pregnancy where there is a risk of premature birth of immature children.

The process of embryo transfer is performed under control by abdominal ultrasound probe, when a speculum is applied into the vagina, and by using a very thin flexible catheter the embryo is placed at the junction of the second third of the third-third, of the cavity of the uterus. In our clinic shortly before we return the embryos the biologist-embryologist makes a laser assisted hatching, i.e. a hole with a laser cartridge around that embryo thus helping the embryo to stuck quickly to the wall of the uterus and to be implanted.

The embryos which are not transferred into the uterus yet are with satisfying quality can be frozen or vitrified and can be transmitted, and transferred in a future cycle. The quality after thawing is the same as before freezing.

After the embryo transfer it is recommended to stay in lying position for 50 to 60 minutes, then at home it is recommendable to rest but not exclusively lying in the next 8 days, when the implantation is considered complete, continuing with progesterone treatment and additional therapy is prescribed immediately after aspiration of the egg cells. 14 days after the transfer, the blood levels of ßHCG (pregnancy hormone) are tested and if the test is positive the prescribed treatment by the doctor is continued until the first ultrasound when the pregnancy is examined, the number, and whether there is a positive heart action.

If the pregnancy test is negative the whole therapy is stopped and the patient is prepared for another procedure, that will suit her the best.

Although in vitro fertilization is not 100% effective, this method has successful rates as the natural conception even higher. But the possibility of delivering a healthy child is lower than the natural conception i.e. globally 26% compared to the natural one of 30%. In comparison with partners who do not have problems with infertility 15% of all egg cells will be fertilized, 15% of all fertilized egg cells will be implanted, 70% implanted will also be a biochemical pregnancy that will not even be registered or, 40% of total pregnancies who have been registered may result in miscarriage, often in very early days, approximately 30% of all implanted embryos will end with delivery.

Woman’s fertility decreases with age, as older the patient is as less egg cells are gained during the IVF procedure and are with lower quality.

Unfortunately the In vitro procedure is not a method that can overcome all the infertility problems. 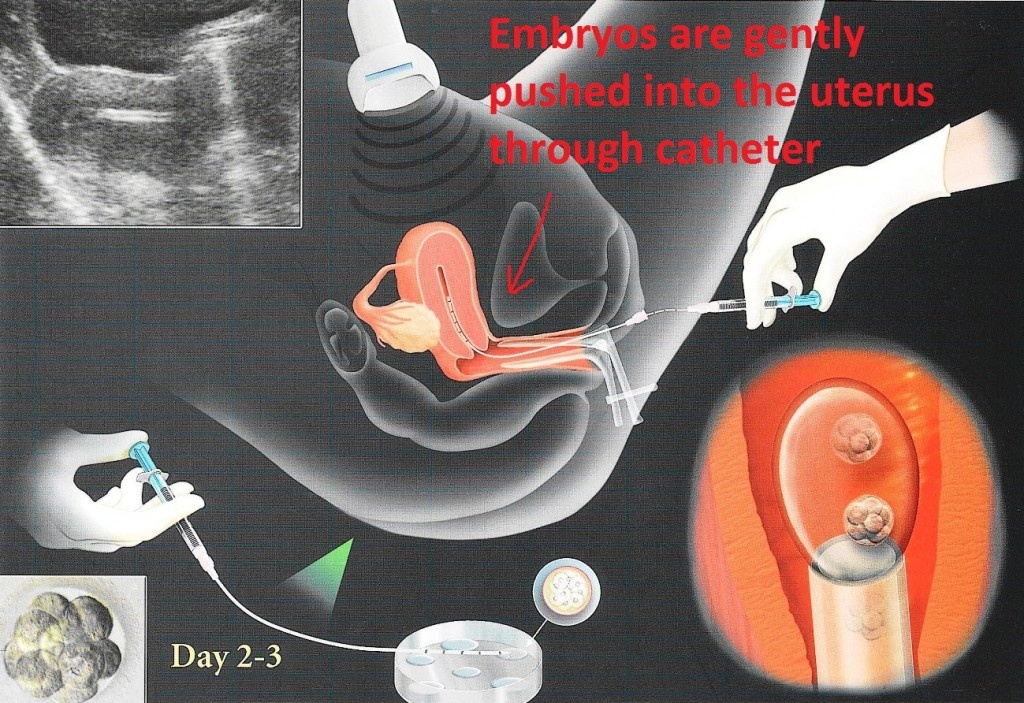 This method of assisted reproduction is used in cases of severe male infertility.

It has been used since 1992, and it is consisted of injection (insertion) of best quality sperm,  using a special tool (micromanipulator) under a microscope with a large increase in the egg cytoplasm. After fertilization, the embryo development is monitored, and the entry is as in classical in vitro.

In which cases is this method used?

IMSI stands for Intracytoplasmic Morphologically Selected Sperm Injection. The IMSI process involves the assessment of sperm, at very high magnification, using an inverted microscope. This digitally enhanced microscope provides a much greater magnifying power (about 6000x magnification) compared to the one normally used in ICSI (200x). This highly-magnified view may enable us to identify subtle sperm defects that are not visible with a conventional ICSI microscope. Our embryologists examine defects within the sperm head itself as well as checking for more conventional shape size and motility abnormalities. Once selected, the sperm is injected into the egg in exactly the same way as with the standard ICSI procedure.

PICSI(PRESELECTIVE INTRACTOPLASMIC SPERM INJECTION) In natural insemination, a successful oocyte fertilisation can only be achieved by a sperm capable of binding to a chemical substance (hyaluronan) present on the oocyte’s surface. Such an interaction can only be achieved by a mature sperm that has the biochemical capacity to bind to hyaluronan. PICSI is a technique that simulates the natural selection of mature sperm. The principle of this method is the cultivation of mature sperm in a specially treated dish, to which a gel containing hyaluronan is applied. The sperm selected are then used for micro-manipulative fertilization